The former capital of the Fassa Valley

The village of Vigo di Fassa, once the decision-making heart of the entire Fassa Valley, is now home to the Istitut Cultural Ladin, a centre for the study and protection of the Ladin language, the Comun General de Fascia and the Ladin Museum.

Thanks to its strategic position, it was, and still is, an important communications route between Trentino and the Alto Adige across the Passo Costalunga-Karerpass, which allowed the village of Vigo di Fassa to attract tourists and to develop economically.

Today, Vigo di Fassa is a tourist centre with a large number of hotels, allowing both winter and summer visitors to get the most out of the opportunities that this village and the valley itself have to offer. Excursions and walks, as well as ski facilities, bring Vigo to life. 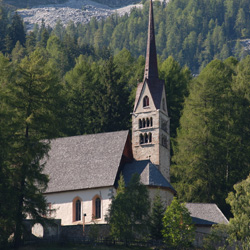 Santa Giuliana in Vigo di Fassa, high on a hill and shrouded in traditions and legends, is still a place of worship. Dating from the mid-15th century and consecrated in 1452 by Cardinal Nicolò Cusano, the church is the oldest in the whole Fassa Valley.

Do not miss the triptych sculpted by Giorgio Artz in 1517, consisting of a three-part chest supporting the statues of the Madonna and Child in the centre, Santa Margherita to the right and Santa Giuliana to the left.

The interior of the sanctuary has a fresco cycle, the most precious and best preserved of those in the Alto Adige and Trentino, depicting angels, musicians, prophets and saints with the three-faced Eternal Father in the centre: a single God represented by three people (the Father, the Son and the Holy Spirit).

Located in the small hamlet of San Giovanni, this Gothic church features a high bell tower with a spire. For centuries, it was considered the mother church and the fulcrum of religious and civic life in the valley, where the locals would attend mass and receive sacraments.

Recently restored, the Pieve has seen a number of works and superimpositions of frescoes. One example is the Pietà to the right of the Gothic portal: the commemorative stones of 1858 and 1902 cover part of the painting.

The Gothic sandstone portal with three bas-reliefs on the sides is also of interest. They depict the coat of arms of the bishop of Brixen, that of a local noble farming family and that of Francesco Mauringer, an episcopal administrator, who, according to scholars, was the designer and manager of the building of the Pieve.

The LadinMuseumin Fassa, run by the Istitut Cultural Ladin, was founded in 1981 in the hamlet of San Giovanni, and gives visitors the chance to rediscover the traditions and customs of the Ladin people through historical reconstructions.

The Museum is divided into various sections, such as the description of ancient Fassa society with the division of labour and community life, and an analysis of the organisation of society in times gone by with rules and traditions.